There are many different types of shorts that may be found in a hedge fund portfolio but let’s discuss one in more detail: Cyclical Shorts.

The market tends to move in cycles, short term (called cyclical) and also long term (called secular).  Secular markets will typically last between 10+ years while cyclical markets usually last between 2-5 years on average.  Cyclical industries include: Industrials, Airlines, Retail, etc.  These are industries sensitive to the business cycle; revenues peak when the economy is expanding and trough in downturn contractions.

A great example of a cyclical short was homebuilding in 2005. Housing prices peaked in early 2006 as the U.S. saw a rapid increase in the valuation of real estate prices to unsustainable levels.   When home prices started to deflate in late 2006, home builders that owned large amounts of land start to see huge land impairment losses. 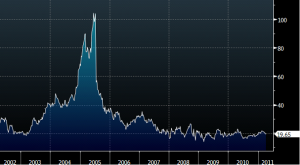 As these losses accumulated, equity prices of public home builders start to collapse.  Equity holders were almost whipped out while investors shorting the stocks made great returns.