A good example of a crowded short trade is St. Joe Company (ticker JOE).  On October 14, 2010 popular HF manager David Einhorn of Greenlight Capital pitched JOE as a short.   Einhorn argued that JOE’s land is worth about $7-10 per share with JOE currently trading in the low $20’s.  While Einhorn is probably correct, this quickly became widely known on Wall Street – everyone knew Greenlight was shorting the stock and Einhorn pitched a very compelling thesis.  If you pitch this in a hedge fund interview, right off the bat they will know you took this idea from Einhorn’s presentation.

With that being said, let’s take a look at the stock.  Einhorn pitched the short and the stock fell 30%. Every hedge fund followed suit, and lastly the short trade got overly crowded. Then, when everyone realized there was no short-term catalyst, the stock almost doubled. 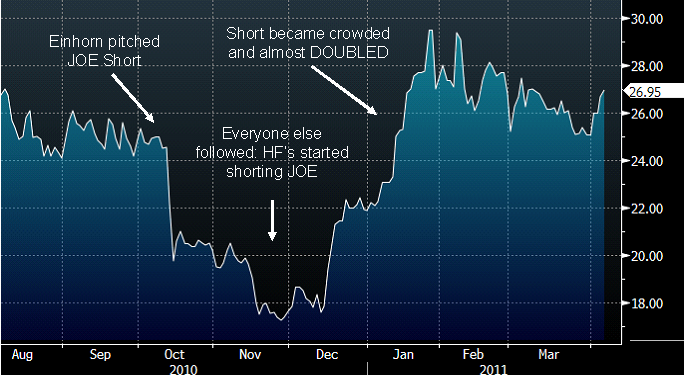 At Street-of-Walls our team is working hard to come up with fresh, variant views on stock ideas.  We publish economic and stock related news daily under the News Section.