This is a real-life hedge fund case study that was submitted during a final-round interview for a New York City-based hedge fund. This case study was completed for a multi-billion dollar hedge fund.

The case study is 8+ pages and was pitched as a short investment in the Industrials sector. This was a very time-consuming and detailed process where the analyst spent a week building out his thesis and making the argument for a short position in this company.

What Is Your View?

The ARRA was enacted in 2009 as part of the economic stimulus package, intended to create jobs and promote investment and consumer spending during the recession. From the government site I have been tracking this on a weekly basis and I have a good feeling for the allotted infrastructure payments. 96% of the $27bn for highways has been obligated; out of this, only 26% has been spent in the entire U.S. at the end of April. In the states most relevant to CX, outlays are closer to 11-13% in states such as CA and FL. It could be that the states are just plugging their holes with the federal money – in that this is not incremental (i.e., if CA has an annual infrastructure budget of $100mn they are simply putting this on hold and taking federal stimulus dollars, so there could be no incremental sales volume here).

CX’s balance sheet is overly levered with $17 billion debt while at the same time operations are falling apart.
At the end of 1Q10, CX was 6.4x levered (net debt/LTM EBITDA).
Per the company’s 20F, CX Breaks Covenants during:

Here’s a look at Leverage if we toggle between 2010 Operating Margin and Revenue Growth:

This is a look at full year 2010 estimates of margins vs. revenue; red shows a covenant breach (4Q10 covenants reset to 6.75x):

Bottom Line: If we don’t see a U.S. housing recovery in 2H10 or 2011, CX will have to make drastic moves in order to avoid breaking covenants.

Under Cemex’s August 2009’s refinancing, CX’s debt covenants will be tested for the first time in June 2010, when its total funded debt is required to be no more than 7.75 times its last 12 months EBITDA. Cemex had a total debt including Perpetual Debentures of $19.458bn at the end of March 2010. The subsequent exchangeable offer for the Perpetuals reduced Cemex’s debt by $437m. I also estimate that Cemex generated a free cash flow in 2Q10 of $100-200mn, down from $323mm in 2Q09. I therefore expect it to report an end of June 2010 total debt of around $18.8bn. $614m of the $715m convertible issued in March is also included in Cemex’s debt, but is excluded under the banking covenants. I therefore estimate that its end-June total funded debt under the covenant will be around $18.2bn. it has US$6b in EUR-denominated debt, so EUR depreciation actually works in favor of reducing Cemex leverage multiples (and vice versa). We should see some of this in 2Q debt reduction.

Here’s the breakdown of all the smoke and mirrors that has happened during 2Q:

Since the signing of the Financing Agreement on August 14, 2009, CX has completed a number of capital markets transactions and asset disposals:

If Cemex is in breach of covenants at 4Q10, the company will need to solicit a waiver. Given that they completed the US$15b refinancing less than 1 year ago, have achieved 2009 and 2010 and milestones way ahead of schedule, and have continued to strengthen the balance sheet with equity issuance, convertibles, and divestitures, the company might be able to obtain a waiver in exchange for a normal fee.

This is absolutely a call on U.S. HOUSING coming back in 2011/12 – meanwhile, the infrastructure investment starts to wear off a bit in 2011, and by February 2012 all the ARRA money is supposed to have been spent!

If we model in a robust worldwide economic rebound, we’re still skating on very thin ice for the stock!

On the chart below, observe how close CX will to breaking covenants under a very positive economic rebound scenario: 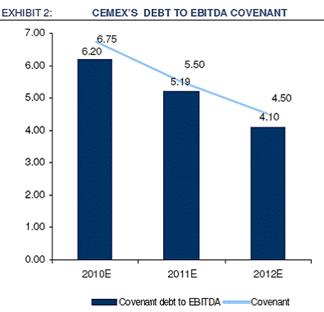 Meanwhile, EBIT fell by 54% YoY in 1Q10. With a slowdown in U.S. housing, and budget cuts in EU/Spain, we’re looking at huge likely margin pressure in the back half of 2010:

The chart below shows cement production (million tons) by country in which CX has sales.

Notice that US/Mexico/Europe make up 72% of revenues:

CX has operations all over the world:

Industry Data in the U.S. has been slightly positive from March-May but is starting to lose steam:

CX is trading at 9.5x 2010 Consensus EBITDA. 2010 Consensus EBITDA is still way too high in my view, but look at the delta between implied prices below. If we apply a 9.5x multiple on my estimated 2010 EBITDA, we get an implied price of $5.50. We could even argue for a lower multiple; right now, CX is trading at a 10% premium to the worldwide cement producers based on EBITDA.